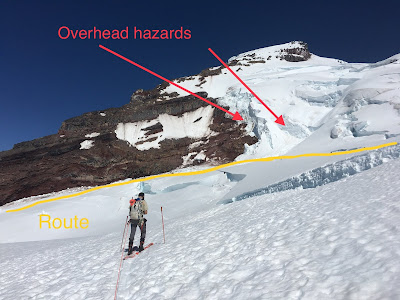 On Thursday, June 13, a snow bridge spanning a large crevasse at approximately 8800 feet on the Coleman-Deming route collapsed. This bridge had been the main route across the crevasse. As an alternative, some climbing parties chose to end run the crevasse to the climber’s left. However, this route travels close to hanging ice and loose rock in the area known as the Roman Mustache. These are major objective hazards that should not be underestimated. They have the potential to collapse without warning, possibly causing serious injury or death.

The 8800-foot crevasse has been a common problem in recent years. Last August, this same area became essentially impassible to most climbers except those with a high level of technical skill. This year, the same issues are happening earlier. Although climbing parties were able to complete summit climbs via the end run last weekend, exposure to such large overhead hazards is an unnecessary risk.

Climbing rangers encourage visitors to consider climbing other routes on Mount Baker or do other activities in the Heliotrope Ridge area, such as seracing on the Coleman or practicing rescue skills on the lower glacier. It's still an amazing place to visit!